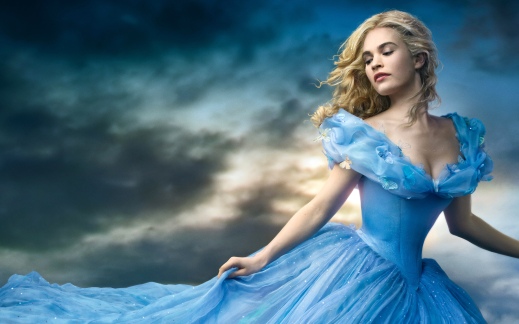 What can I say about this film other then it’s simply beautiful? Cinderella, directed by the awe inspiring Kenneth Branagh, provides us with an atmosphere of magic and wonder.

In Cinderella, Ella, our beautiful heroine (Lily James of Downton Abbey) recreates the sweet character with a modern take. There have been many Cinderellas done up in the past, but what I enjoyed about James’ performance, was the fact that she was still able to stick to the old roots of the character, but also added her own individuality. Though James’ dazzles as Cinderella, it was the chemistry between her and the other characters that brought this film to life. The romance with Cinderella and the Prince (Richard Madden of Game of Thrones) is simply, enchanting. The movie stays true to the romance between them. Though Cinderella is in love with this young man, the film lends itself to her being more an individual than only aiming to find love.  But of course the film would not be the same without the evil step-mother, played by Cate Blanchett. She is so memorizing as the character, that sometimes you just can’t take your eyes off her. But apart from her cruelty, the evil-stepmother has a secret pain, which she only talks about briefly.

Everything about this movie is wonderful. The stars, the characters, the scenery, and the wardrobe, all add to the famous fairy tale. The characters fit together brilliantly in order to keep true to the classic story, but never stop from adding their own spin on situations.

This film marks Disney’s first attempt at transferring classic animated fairy tales into live-action film. And boy, don’t they do a great job. The next live-action fairy tale will be Beauty and the Beast, starring Emma Watson and Dan Stevens. The film is set to be released in 2017.

One thought on “REVIEW: Cinderella”