“When you love something, you shoot it in the face, so it doesn’t become a flesh eating monster.”

Zombieland: Double Tap continues 10 years after the original Zombieland, and tells the story of Tallahassee, Columbus, Wichita, and Little Rock on their journey through the zombie apocalypse. But as relationships begin to crumble, and their now stagnant lifestyles become too overbearing, they must go up against a new breed of powerful brain-eating zombies, while also saving Little Rock from her rebellious departure. Though this film is entertainment at its purest form, Double Tap fails to fully measure up to the original.

Who isn’t glad that these characters have made another return? There’s so much that we loved about the Twinkie-hunting, blood-bath, of the original. Emma Stone, Woody Harrelson, Jesse Eisenberg, and Abigail Breslin return for one more kick-ass good time. And even though it’s been 10 years, it feels as though we never left. The bulk of Double Tap is made up of Stone, Harrelson, and Eisenberg’s performances, as the characters go out to save Little Rock, who left with a new handsome, yet hippie-like, young man. Breslin has scenes once every 30 or so minutes, but she never really has the opportunity to bring the funny. 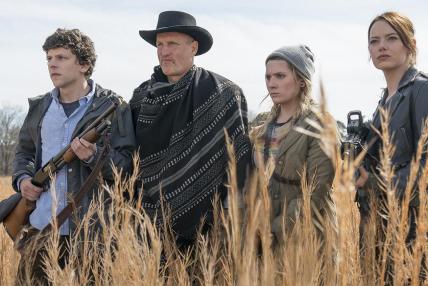 No, Double Tap is Stone, Harrelson, and Eisenberg’s action comedy, and each of their character’s sarcastic and witty personality remains intact. However, Double Tap introduces us to some new, incredibly dull, characters whose time onscreen is short lived. For instance, Madison, a ditzy girl who comes across our main characters’ path, comes off more annoying than funny. These new characters, and the hijinks they get into, only bog down the narrative, and bring about some truly lackluster sequences.

More times than not, these lackluster scenes in Double Tap cause the film to drag. Right in the middle of the film, it’s filler scene after filler scene, with no real direction as to where the story will go. It’s hard to appreciate the good that Double Tap has to offer, because throughout the film, the story loses its way and begins to fall apart. It picks up again towards the end, but not enough bring the film full circle. This isn’t a deal breaker for the overall film, but one that truly ends up adding to its downfall. The uniqueness of the original is missing in this second installment. Not to mention, there’s a great big hole that was once filled with a flourishing love for Twinkies that is sadly missing this go-around.

Zombieland: Double Tap plays to the humor that made Zombieland such a hilarious film. But like most sequels, it’s hard to duplicate that originality. With great actors in tow, Double Tap makes for a decent shot at a sequel, but fails to really produce what we loved from the original.