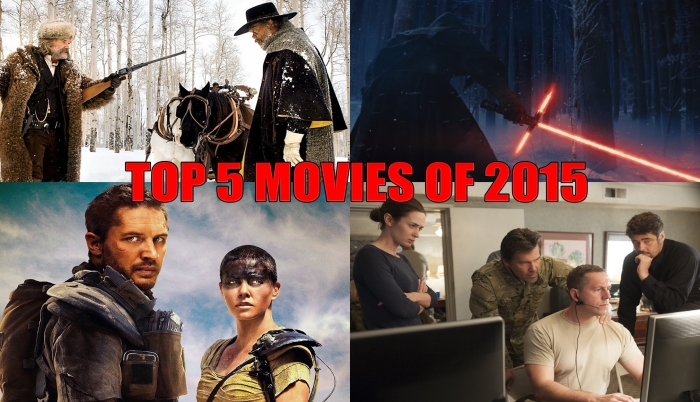 This list was tough to make! I wanted to extend this to as many films as I could, because we all know 2015 was a fantastic year. After weeks of contemplation, I have come up with the Top 5 Movies of 2015.

I am very surprised at Emily Blunt’s film choices as of late. I believe she’s picking grittier characters for herself. Bravo, Ms. Blunt! As with this picture, this film portrays, not only an environment that is less than perfect, but people’s characters that are extremely filthy.

My favorite film (of all time) is the Red Shoes. I remember the first time seeing that film and thinking how beautiful it was to watch. The Revenant takes me back to that time of being enveloped by a fictitious world. Cinematic genius, Alejandro Iñárritu, perfectly blends both the entertainment and the art of watching film. It is simply a treat to watch.

A magnificent film that more than succeeded my expectations. Though it is different from the usual Quentin Tarantino films, I thoroughly enjoyed watching every minute of this gritty-psychological western.

This was by far one of my most anticipated films of the year, and boy it didn’t let me down. I was a little afraid to get my hopes up. I mean, I had been let down in the past. But The Force Awakens has a beautiful storyline and environment. It takes us back to the excitement of the original trilogy.

Mad Max: Fury Road. What More can I say about Mad Max: Fury Road. It does everything an action movie should do. It is beautiful and leaves me wondering “how the hell did they have men perform those dangerous stunts”. I believe that director George Miller surprised himself at how many stunts he was able to get away with. During a time when we go to a movie and see how so many visual effects are forced in throughout the film, Fury Road is a fresh take on the action genre that just made me craving for more.