King Arthur: Legend of the Sword, put a new twist to the story that we all know. A boy named Arthur (Charlie Hunnam), taken from his parents and raised in a brothel, trains to become something more than who he is. After many years since his parents’ death, Arthur finds himself standing at the foot of a giant stone, cleared by the drying of the river. Vortigern (Jude Law), the current King, vows to kill the man who pulls the sword from the stone, because that man is the true heir to the throne. Arthur is forced to attempt pulling the sword from the stone, and to his amazement, the sword is fully revealed. Thus, leading Arthur on a quest to become the King of Londinium.

It’s a simple plot, which if you’ve seen 1963s The Sword and the Stone, or even 2004s King Arthur, you have an idea of how the story will end. Even if you haven’t seen those movies, the plot is cliché enough that if you have any common sense, you know where the story is going. Yes, the story was lackluster at best, with some scenes of epic mediocrity. 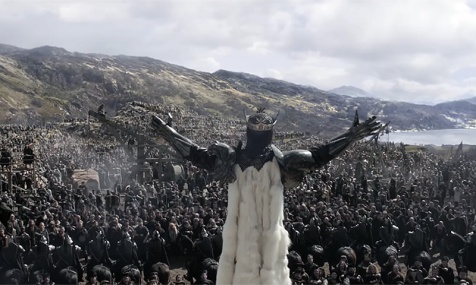 You will know, from the first shot, that this film is directed by Guy Ritchie (Sherlock Holmes, Snatch). Ritchie has a certain cinematography that he sticks to, and the crazy scenes where you feel like you’re in a fever dream or have done drugs, appears on screen too often. The beginning was rushed, literally, and it felt like, “hurry let’s just get his childhood story out of the way.” You have one scene, and then it goes into this ridiculous montage of Arthur’s tough upbringing. But not even the acting could fish this film from bombing.

The acting which hard to watch at times, is bland. Law and Hunnam try to be these tough characters, but it’s just silly. The crap CGI didn’t help matters any. I have not seen CGI that bad since the early 2000s. But what bothered me, probably a little too much, is that it looked as though they went to the set of Game of Thrones, took a few actors, altered their appearance, and put them in this movie. As if those actors aren’t going to be typecast already, this film really set it in stone. Apparently, all those actors will be good for, is a movie set in which their characters wield a sword.

There’s not much to appreciate about King Arthur: Legend of the Sword, but I will say that the score, so brilliantly composed by Daniel Pemberton, added so much more to the film. It is the only redeeming quality of the overall film.

King Arthur: Legend of the Sword is, quite frankly, a mess. It takes you one direction, and then turns and goes a different direction, and then does a crazy montage.  I will say that if you are looking for a good Hunnam film, look no further than The Lost City of Z. It shows that Hunnam has the chops to be good. I beg that you not waste your time with a film as dull as King Arthur: Legend of the Sword.

King Arthur: Legend of the Sword