“This will be a game night to remember.”

Game Night stars Jason Bateman and Rachel McAdams, and tells the story of Max and Annie who regularly get together with their group of friends in order to play board games. When Max’s brother Brooks insists on having game night at his house, the night becomes a crazy whirlwind, as real thieves crash the party, putting everyone’s lives in danger. I was excited to see this film, being that I had heard that it was hilarious, and to a certain extent the film has its laughable moments.

Game Night is a different sort of comedy, with the cast being the highlight of the film. McAdams is surprisingly funny, after not having been seen in a comedy for a while now. I hope she continues to spread her talents among both drama and comedic films, because I believe that she is one of the few actresses that can make that transition whenever she pleases. Bateman’s performance is nothing special, because it’s basically like every performance he’s ever done. He continues to portray crazy characters who have been wronged, or characters who are annoyingly insane. In my opinion, the best characters, Billy Magnussen, who plays Ryan, and Sharon Horgan, who plays Ryan’s date, Sarah, were the best of the bunch. Ever member of the group of friends really added their own to their characters, but these two characters, Ryan and Sarah, 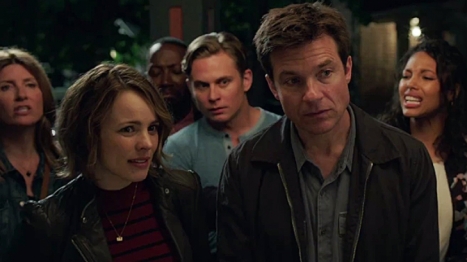 excelled in their comedic timing, while also delivering some of the funniest lines in the film. But it was their odd love/hate relationship, mixed with Ryan’s stupidity, that really made these two actors so funny.

Director John Francis Daley, most known for his role in Freaks and Geeks, does not have many redeeming factors that would lead you to believe in his works as a director. I will say when compared to Horrible Bosses and Vacation, both Daley, and co-director Jonathan Goldstein, step up their caliber of directing and create a movie that is entertaining.

I can’t say too much about the negatives of this film without getting into spoiler territory. I wish the script could have followed one thread of ideas instead of combining multiple ideas in the final cut. But even for the film’s negatives, Game Night is a lot funnier than the predictable comedies that have been released lately. I had hoped this film would have been better, but who am I to complain about a movie that is as enjoyable as this.