“I made you look like a prince on the outside, but I didn’t change anything on the inside. Prince Ali got you to the door, but Aladdin has to open it.”

Aladdin is the newest live-action Disney remake and tells the story of a young man named Aladdin, who while going about his daily life, crosses paths with Princess Jasmine, only to soon be in the midst of the adventure of his life. Aladdin has faced so much scrutiny over the past few months, or at least since we saw Will Smith’s Genie interpretation on the cover of Entertainment Weekly. Though Aladdin does have its fun moments, it cannot hold a candle to the original 1992 animated version.

Mena Massoud, who plays our titular character, is still a relatively unknown actor at this point, and boy does it show. I wasn’t incredibly impressed by his acting as he often came across as a bumbling idiot on screen. The portrayal of the character, needless to say, wasn’t terrible, but it just wasn’t great. Massoud has a long way to go with his acting, because this film did nothing to raise his status as an actor. As for Princess Jasmine, Naomi Scott just smashes the performance out of the park, but is it really that surprising? Scott, who played Kimberly in the 2017 Power Rangers movie, was the standout of that film as well. Her portrayal as Jasmine is no different. Any actor taking on a beloved character has so much to grapple with, but Scott uses it to her advantage. At no time did her acting seem bland or forgettable. She takes on the role of Jasmine and puts her own spin on it. Not to mention that she exhibited some incredible singing talents.

So now we come to Smith’s take on the Genie. I must say, I was surprised at how good it was. Robin Williams is synonymous with the character of the Genie, which was why Smith’s initial appearance garnered so much scrutiny. Not only did Smith put a modern twist on the story, with the charismatic flare that Smith naturally has, but he embraced Williams’ Genie while also making it his own.

As for the storyline, it really doesn’t deviate from the 1992 version, but does add a few different things here and there. This includes adding in some new music and changing some of the locations of the story, which were at times good and bad. Director Guy Richie never fully grasped the undertaking of directing a musical. There were times when he could’ve filmed scenes differently, or brought out more from the actors’ performances. In relation to the music, I never had the opportunity to see the Broadway version of Aladdin, so I don’t know what new elements might have been brought from the stage to the big screen. But, the new music added nothing to this live-action remake. It was unnecessary, and not as tear jerking as it wanted to be. Though Massoud was disappointing as Aladdin, he was not the worst of the characters. Marwan Kenzari, who plays Jafar in the film, was exceptionally bad. His antics throughout the film didn’t make me concerned for the well-being of our beloved characters. Instead, Jafar’s villainous actions were laughable, only to be the cherry on top of a disappointing remake.

I understand that Aladdin wanted to be a grand remake, and in all seriousness, it wasn’t too bad. There’s no doubt that the original animation will remain the primo Aladdin film, as I’m sure many of us who grew up with the original film will end up saying. Either way, Aladdin is still an adequate remake, which will bring about some good wholesome fun. It just wasn’t the remake we were all hoping for. 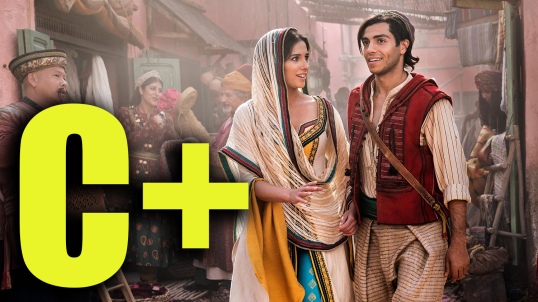