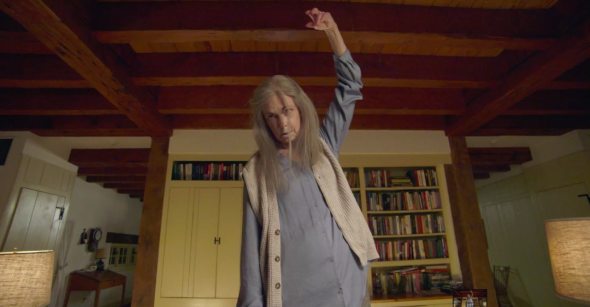 The Visit takes place when a mother (Kathryn Hahn) let’s her two children (Olivia DeJonge and Ed Oxenbould) stay with their distant grandparents (Deanna Dunagan and Peter McRobbie) for a week. The young girl, Rebecca, an aspiring documentarian, decides to film the monumental trip on digital cameras.

I am on the fence when it comes to the “found footage” technique that so many directors have decided to use in order to capture elements of distress and or thrills for the audience. There are parts of the technique that I think M. Night Shyamalan did right. For instance, I think he edited this film very well. He made sure to use less cinematic cuts, jump scares, and composed music. The film, for the most part, is very quiet due to the fact that he tries to keep true to the scenario that this was something that a person just stumbled across and decided to watch.

As you’ve surely seen in the trailers, during the late night hours, the grandparents do become, how should we say, disturbed. I must say there is the late night door scratching, and the late night running through the house. So it does get pretty strange. But without giving too much away, the film does begin to escalate from there, as the children begin to peel away the layers to their grandparents’ dark and mysterious secrets.

I’m going to refrain from comparing this film to Shyamalan’s great body of work, like so many others do. Am I being biased? Maybe. But I appreciate someone who can come out even after they have been hit numerous times over, and still do what they love doing. I was rooting for Shyamalan to get back on stride with this film, and over all, I think he has. The Visit was a mindless thriller that was fun to watch. It had a perfect blend of horror, humor, and human emotion. Did I expect another Sixth Sense right off the back? No. But at least we can start making amends after his last few films.

So for the past couple of days I’ve been watching Little Fires Everywhere. If you have Hulu, watch it! If you don’t have Hulu, get it and watch it! It’s really good!
Yesterday’s Quarantine Watches: Onward
Tuned in to watch Ace Ventura yesterday. Another great nostalgic film that put me in a good mood.
Yesterday’s Quarantine Watches were another mixed bag. Finally got around to seeing Arbitrage, and it wasn’t too bad. Pretty interesting. And then, of course, back to my feel-good movies with Dead Man’s Chest and The Emperor’s New Groove. - I hope everyone is healthy, staying home, and watching some movies!
Last night, I added ‘A League of Their Own’ to my quarantine watches. Great movie to watch - especially if you need a little bit of a sports fix.
Yesterday’s Quarantine Watches: Naked Gun (the baseball scene alone is worth watching), The Mask of Zorro, The Plot Against America Part 3, and of course, some How I Met Your Mother. - Stay Safe Everyone!