Miss Sloane brings us a decent political thriller, only to fall short of movie gold.

It’s hard to say what the overall goal was in this film, Miss Sloane. Although a decent political thriller, this film flip flops too many times to keep track, which ends up being its downfall.

Miss Sloane takes us into the political arena, as famed lobbyist, Elizabeth Sloane, takes on the gun lobbyists in an effort to pass a stricter gun bill being presented in congress. Miss Sloane uses her keen thinking skills to take on the gun lobbyists who ooze money. But as I said before, it’s hard to really see what audience this film is aiming at.

I will say that Jessica Chastain truly brought her A game. But often times, the dialogue she was given was laughable and hard to believe. There’s a scene in the film when she’s meeting with someone, only to laugh right in their face. I didn’t understand the random outburst of laughter on her part. No matter how odd the man’s statements were. There was a lot of those awkward parts in the film, almost as if they were filler for the lack of meat the script so lacked. 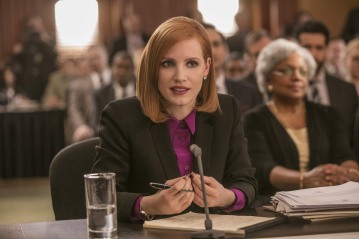 But the subject matter I expected to see was that of a “women empowerment” type film. And the way Miss Sloane presented herself, was nothing short of a woman who knows what she wants. This subject matter needed to be shown on film. But it doesn’t do any good to show a strong woman in her field, when the story presents her as a villain at every turn.

The cast was basically served on a silver platter to the director and the writer. A cast that has impressed us in previous films. But the lack of overall quality in the script and the directing, does nothing but leave the viewer with a bad taste in their mouths. In order to have a great film, EVERYTHING must come together behind the scenes. And sadly for Miss Sloane, it didn’t come together at all.

I spare you the details of why this film truly suffered, in order to not spoil the story for you. Miss Sloane builds up at a great pace, but the ending is lukewarm, and rather preposterous. This film is not a “pro-gun” film, nor is it an “anti-gun” film. And in my opinion, this is not even a “feminist” film. It treads the line between all issues, leaning one way ever so slightly. No, in all its untapped glory, Miss Sloane is a film that takes a look at the corruption in politics. Making our titular character the scapegoat of our story, as the rest of the politicians’ slates are wiped clean.