REVIEW: THE ASSASSINATION OF JESSE JAMES BY THE COWARD ROBERT FORD (2007)

“You want to investigate my courage? Do you? Find out! Find out!”

We’ve all seen at one time or another the stories of Jesse James. The one that prominently comes to mind is American Outlaws with Colin Farrell. It’s a vapid story that creates a positive and God-like image of Jesse James. Portraying him as a man who did no wrong, but only killed to help the needy. Well, it’s an interesting take, and a heroic story of the famous outlaw that clearly expunged some of the more violent tales. Then comes The Assassination of Jesse James by the Coward Robert Ford. The film has no flashy action scenes, or men jumping from one horse to another. No, The Assassination of Jesse James presents itself, not so much as traditional western, but almost a documentary. Brad Pitt’s performance as Jesse James may be the rawest and most vulnerable performance of his career. Pitt is what makes this film so special. Portraying James’ constant mood swings with such authenticity, and painting a mosaic of a man who’s deeply troubled with the demons of his past, which makes for that vastly different picture of the man who’s become so famous. 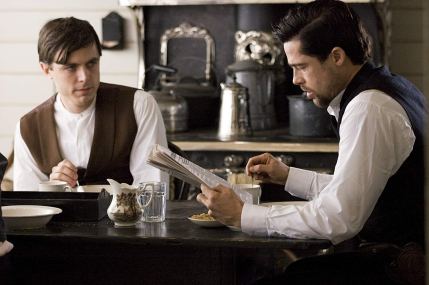 But as James nears the end of his career, Robert Ford (creepily played by Casey Affleck) is there hanging on to James’ every movement. Eagerly trying to become a close confidant of the man he looked up to when he was young.

Director Andrew Dominik does an incredible job adapting this story for the big screen, considering the project was on hold for a few years. There are lengthy scenes of dialogue that can go on for several minutes at a time. But those long conversations never make the story feel diminished, nor do you feel provoked to fast forward. No, the calmness of this film is a character all its own. Thus, giving you the false sense of security in the presence of a film whose characters could take a turn at any time. As you watch the film, you can’t help but think that each shot looks like it’s taken straight from a painting. Though Dominik’s direction is superb, we can thank the master, Roger Deakins, for creating some of the most beautiful cinematography that you will ever see. It’s no surprise that Deakins kills it with every project he’s attached to, but Assassination of Jesse James has to be one of my favorites.

Assassination of Jesse James by the Coward Robert Ford just takes your breath away. From the way the story is laid out before you, to the stunning scenery and cinematography, this is one of the best films you could ever lay your eyes upon. It’s a modern classic that will make any movie lover tremble from the overwhelming beauty. I will admit this story’s slow pace may not be for everyone, but I can’t imagine skipping out on a film as great as this.

The Assassination of Jesse James by the Coward Robert Ford

Written and Directed by: Andrew Dominik

One thought on “REVIEW: THE ASSASSINATION OF JESSE JAMES BY THE COWARD ROBERT FORD (2007)”