“-We do. But it’s not going to work, you know, cause I’m a Capricorn and you’re fucking nuts!”

Hellboy is the newest take on the graphic novel by Mike Mignola, and tells the story of Hellboy and his sidekicks as they try to defeat The Blood Queen, Nimue. Hellboy must make sure he continues on his path of “good” in order to save the world, even though at times he is persuaded to take the path of death and destruction.  I don’t know what emotion I hoped to experience after watching Hellboy, but I can easily say that as a fan of Guillermo del Toro’s Hellboy films, I was looking forward to this new take. However, there was nothing else to see here but a hot pile of garbage.

I knew that this Hellboy movie was going to be grittier than the previous two, with the past films being rated PG-13. But all the R rating means, is a crap ton of blood. Watching the violence reminded me of those scenes from the Resident Evil movies. It may have been that I saw Milla Jovovich and the blood, and immediately thought terrible movie. I don’t mind explicit blood on screen, but if you’re going to do it, do it well. There’s a distinct miscommunication throughout the film between the buckets of blood and where it can be incorporated to make the action more entertaining. On the topic of action scenes, there is nothing exciting about it. The action sequences are stale and boring. All the characters do is slice at one another, causing proficient blood loss, or they just chop off these character’s heads. It’s like watching a bad horror movie where there is no plot. Instead, the screen oozes blood so the people behind the scenes can say, “isn’t that scary?!” 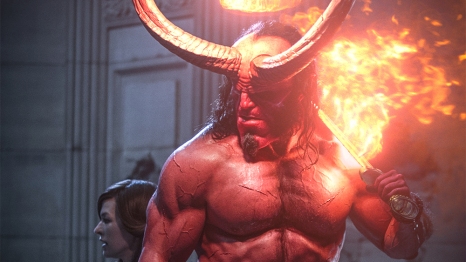 I can see what the director Neil Marshall was going for, but the execution of it was nothing short of terrible.

But the buckets of blood weren’t even the thing that bothered me the most. The story begins with a bunch of lore with King Arthur and his men defeating the Blood Queen and chopping up her body parts all over the world. This is due to her ability to regenerate if she were to become whole again. Hellboy’s origin story is less touched upon as it basically just begins with him kicking ass in a brand new Hellboy like fashion. Not to mention, his new sidekicks and his father, who is more prominent in this reboot, don’t really add anything to the film. These character are flat, and their powers are unimpressive. The poor script absolutely did no favors for the cast that played these mythical beings. David Harbour who plays our titular character, doesn’t really add the grit that I was hoping for. Harbour could have easily been a step up from the previous Hellboy, Ron Pearlman. Not to mention, the overall Hellboy exterior is 100% better than the last. However, Harbour’s take on this character fell extremely short. This includes, Jovovich, who once again plays the same old Jovovich characters. The Blood Queen is so laughable and completely unintimidating. It’s sad, because these characters had so much potential.

I don’t know what else to say about Hellboy other than it’s incredibly bad. I know there are people out there who wanted this reboot to fail, because they enjoy the originals so much. I only want a good action movie with epic scenes and a little bit of sarcastic humor sprinkled throughout. But sadly, Hellboy gave us none of that. Instead, bringing to the big screen a messy script, stale fight scenes, and uninteresting characters. Hellboy came in with a load of potential, but sadly, it just bombed. 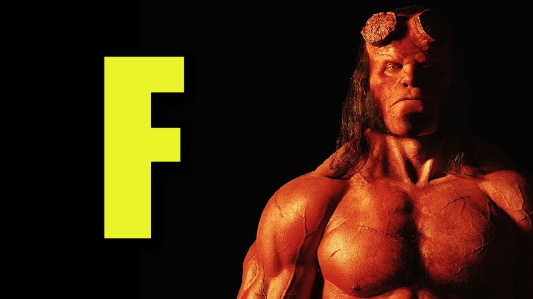