“Where were you the night Lily Bridges disappeared?”

In continuing this year’s theme of books that shouldn’t be made into movies, Earthquake Bird enters the race. This soon-to-be forgotten film tells the story of Lucy Fly, a mysterious woman, and our narrator, through 1980s Tokyo. When Lucy meets an equally mysterious man named Teiji, the pair fall in love, but are restricted in intimacy to Teiji constantly taking pictures of her. But when Lucy introduces her new American friend, Lily, to Teiji, the story deepens itself into a narrative of love triangles, jealousy, and murder. Earthquake Bird is a complex story, but maybe too much of a complex story for its own good.

As you sit and watch Earthquake Bird, it reveals layer, upon layer, upon layer… This unveiling keeps going until the credits. But as much as I would like to say how much I enjoyed a film that keeps the mystery going, Earthquake Bird goes nowhere. It fumbles and eventually finds itself in a huge hole, unable to dig its way out.  The characters are hard to sympathize with, or understand, and don’t garner the appropriate reaction from the viewer. You’re told to look at certain characters one way, and then, all of a sudden, you’re supposed to feel a completely different way. The truth of the matter is, Earthquake Bird fails to live up to the excitement that it, itself, builds. 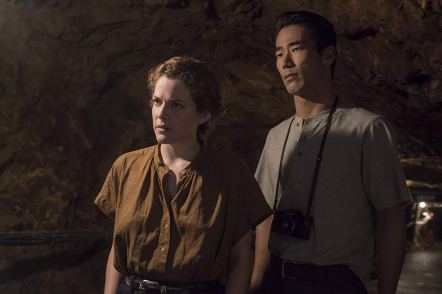 Alicia Vikander, or should I say Academy Award winning actress, Alicia Vikander, has the talents, but she is so limited with the character of Lucy. The whole time Vikander stares mystic-eyed at whomever she’s staring at, because she stares a lot. It’s hard to appreciate her acting, because those talents are rarely seen. Her psychobabble of a character is more often boring than intriguing. Riley Keough plays Lily Bridges, a woman who tries to come between Lucy and her man. But as we learn more about Lily, we begin to wonder, is she really who we think she is? Keough’s character is a little more polished compared to the rest, and her performance helps that. Are any of these characters what we perceive them to be? Who knows, because the film never gives us a clear cut answer. Interpretation is always an interesting conclusion to leave your viewers with. But when a writer or director takes that route, they better do it well.

Earthquake Bird, I must say, is beautifully shot. Director Wash Westmoreland does a unique job with telling this story. But where Westmoreland shines is when he embraces the Japanese culture, and more importantly, Japanese culture during the rockin’ 80s. His adaptation of the book may leave something to be desired. But speaking from a visual standpoint, the movie is aesthetically pleasing.

You can see bits, if you look hard enough, where Earthquake Bird could have been great. The actors of the film, matched with a sinister plot, well, that seems like a perfect match. Not in this case. Earthquake Bird sloppily puts together an idea, but can’t execute it. Maybe we can love this more as a novel, but in all honesty, Earthquake Bird is a “Lifetime” movie better kept in book form.