“Strange that a man can live with a woman for ten years and not know the first thing about her.”

It’s always hard to grasp the characters that Bette Davis plays. She’s a pistol, a force of nature upon the silver screen. And although it would be easier to take the pleasant roles, she spars, eye to eye, with her male counterpart. Who, oddly enough, often comes across as the weaker of the two. Her characters are not the ones you sit and root for, and if you do, you initially think twice. For Davis’ character in The Letter, this is no different.

Directed by William Wyler, and based on the play by W. Somerset Maugham, The Letter begins by throwing you into the deep end of a murder—seen in the cold, dark evening, underneath the unflattering moonlight. Davis plays Leslie Crosbie, the wife of a rubber plantation owner. She is accused of murdering Geoff Hammond, but claims that he got drunk and forced himself upon her. At least that’s what she says. Though Leslie puts herself at the center of this investigation, her husband, Robert (Herbert Marshall), believes her 100%. Robert hires his lawyer, Howard Joyce (James Stephenson), in an effort to expunge her of these charges. Clearly, Robert believes this trial to be open and shut — a formality of a woman who only defended herself from a would-be rapist. But as The Letter continues, Leslie’s story alters, never fully allowing the truth to unfold. What is she hiding? Is she hiding anything, and only dealing with the anxiety of her situation? It soon comes to the attention of Howard’s assistant that there is a letter, in the possession of Geoff’s wife, claiming that Leslie requested Geoff’s presence in her home while Robert would be out in the fields. This letter, however, has a mighty fine price of $10,000. 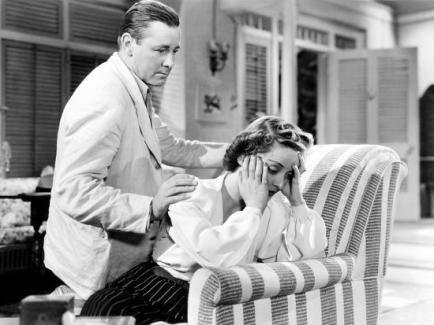 Howard wrestles with the idea that if he buys the letter, Leslie may be found innocent, but he may also jeopardize his career in the process.

The Letter may be seen as the crown jewel of both Davis and Wyler’s careers. Though I would argue that 1941s, The Little Foxes, Davis and Wyler’s third and final collaboration, is better. Wyler cast Davis in three of his films ranging from 1938 to 1941. Though one could say that their personal feelings towards one another may have led to their collaborations ceasing after only three films. Davis held her own against the patriarchal system that plagued society during her career. Her roles were a breath of fresh air, though not entirely the ones to garner much sympathy. Davis’ performance of Leslie was no different. Leslie is not a good person, as you soon find out. But there’s something about her portrayal on screen that leads the audience to somehow… sympathize with her. An independent female, but one who clearly shows her vulnerability.

The Letter’s story escalates, only to plateau too quickly. The story, as a whole, is a bit clunky compared to other Wyler films. The pieces of this mystery just don’t fit perfectly with each other. This leads to the ending feeling a bit misplaced rather than an alternate ending that would have seen Leslie dealing with her actions for the rest of her days. A woman left with her misery, and having almost no one to give her comfort — a crossroads of sorts. It’s a good film, don’t get me wrong. I can understand why people may classify The Letter as the shining jewel in Davis’ filmography. But for being a noir, the film’s mystery doesn’t have the intrigue that can captivate an audience.

The Letter, though impeccable in its filmmaking and performances, can’t perfectly grasp this dark story of a woman being accused of murder. For any fans of Davis, there’s no doubt that you will love this film, as her performance impeccably displays her talents. The Letter is a decent noir, and one that showcases some of Davis’ best work.