“In solitude, I felt the liberty you spoke of. But I also felt your absence.”

There are years that go by where foreign films fail to resonate with audiences to such an extent as we’ve seen from the foreign films in 2019. This category, however, begins to heat up with the addition of French film, Portrait of a Lady on Fire. The film follows Marianne, a young female painter who’s hired to paint a portrait of a young woman, Héloïse, for her soon-to-be husband.  When the young women’s relationship becomes more than platonic, their forbidden love becomes the strength that comforts them in a time of anguish. With beautiful landscapes, superb acting, and brilliant direction, this heart-breaking story shows filmmaking at its best.

There’s a layer of mystery that surrounds the story in Portrait of a Lady. More importantly, a layer of unknowing, as we follow the lovers’ journey. The intimacy that jumps off the screen is with you right from the get go. You’re transported to this picturesque environment that envelopes these two women, making the aesthetic of the film unbelievably breathtaking. Throughout the film, Marianne (Noémie Merlant) and Héloïse (Adèle Haenel), wrestle with the circumstances surrounding their current situation. More importantly, Héloïse’s —forced—soon-to-be marriage to an important man. And rather than accepting her fate, Héloïse’s anger comes to the forefront, pushing back against the marriage for as long as she can. 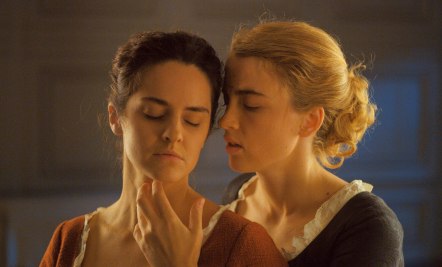 She confides in Marianne, which brings them closer throughout the film. Merlant and Haenel are exquisite, and fully soak up their characters’ personas. Portrait of a Lady is so quiet, and takes pleasure in the silence, that Merlant and Haenel must convey their emotions through their looks and mannerisms. Their onscreen romance is choreographed like a dance. You’ll understand this as one of the first scenes shows the two ladies going to the beach, stealing glances from one another. There’s no dialogue, just looks. There’s an air of intimacy that will give you the feeling as if you are a fly on the wall, watching these women struggle to fully surrender themselves to their forbidden love.

Portrait of a Lady is incredibly filmed, with so much of the credit going towards the film’s extraordinary director, Céline Sciamma. You can’t take your eyes off anything that happens on screen. The film has little dialogue, and may seem to some as a bore. But it’s the slow narrative that makes this film so wonderful. A quiet film saturated in the blue skies and crisp clear waters of their surroundings. It sets up the idea that this should be a peaceful film. But in the end, the calming atmosphere is a beautiful contrast to these two characters’ tumultuous efforts of wanting to be together. Portrait of a Lady is how a film should be; a gravitational pull bringing you farther from reality with each passing moment. Thus, losing yourself to the story completely.

There’s something so amazing, and almost pioneering, about Portrait of a Lady of Fire. It may not receive the glory that it so justly deserves, but this film is a compelling narrative that will almost surely impact you as it has done with so many others.

Portrait of a Lady on Fire