It’s a turbulent time for our justice system, and I’m sure I don’t have to go into specifics of the ongoing tensions. Because of that, it’s time for our movies to reflect the situation we find ourselves in, and tell a gripping story that will impact and inspire us to do what is right. Clemency tells the story of Bernadine Williams, a prison warden who’s about to oversee her 12th lethal injection. But after the last botched execution, Bernadine begins to slowly unravel with both her career and her personal life taking on the brunt of the pain.

Alfre Woodard is absolutely amazing as Bernadine. Woodard’s tenacity and strong portrayal of Bernadine creates a complex character who must walks a fine line with being a woman in a male dominated position. She has to be tough, because she knows that the smallest action of compassion could have her fellow colleagues believing she is too weak for her position. Much like any female in any type of authoritative role. Woodard’s a magnet, and the driving force behind the film. She absolutely explodes onscreen. 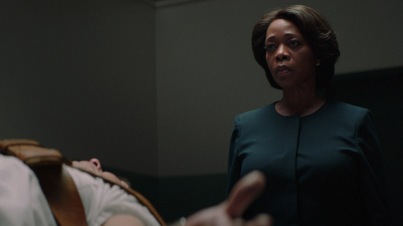 However, Woodard performance is the only element that truly keeps this film afloat.

The problem with Clemency is the incredibly dry story. It’s nicely filmed by writer and director Chinonye Chukwu, but never really drives home the themes, which are so obviously against lethal injection. Clemency’s slow pace, at often times, becomes completely stagnant. A slow burn, I can understand. But the way the film progresses, it travels at a snail’s pace without fully developing the characters to the point they needed to be at. Aldis Hodge, who plays the death row inmate, Anthony Woods, is never given the opportunity to unleash the emotion behind his character. There are a few moments, to be fair, where Hodge’s potential begins to show. But the scenes are so small, it’s over before you can fully immerse yourself in them. Should the film have focused more on Woods’ situation, the waterworks would be flowing. But with Clemency, you’re only given vague character building moments, but nothing that causes you to become unconditionally devoted to them.

With this day and age, there are many who are advocating for the disbandment of lethal injection, not to mention the racial discrimination by our justice system. Clemency fails to fully capitalize on those themes that would make this movie incredibly emotional. Though Woodard’s performance is outstanding, it fails to make the film worth watching.