REVIEW: PRIDE AND PREJUDICE AND ZOMBIES 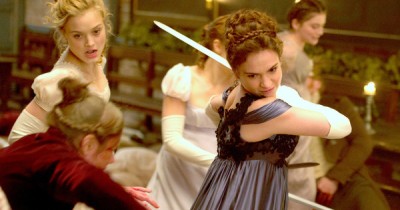 Director Burr Steers takes on the classic novel, Pride and Prejudice, but with a twist of The Walking Dead.

Pride and Prejudice and Zombies tells Jane Austen’s basic love story between both Elizabeth Bennet and Mr. Darcy. But where the film differs, obviously, is the plot of having zombies. Instead of Ms. Bennet playing just the stubborn young woman who loves Mr. Darcy, now she is a zombie warrior, having been properly trained with her sisters in China. As Darcy is now a Colonel, he is also known as one of the best zombie warriors of his age. Set in London, the city is now overtaken with the zombie outbreak, and this wonderful place we once knew, is now dark and dismal. Elizabeth, her sisters, and Colonel Darcy, must step up to save the good people from becoming victims of the living-dead.

I was looking forward to this film, and to be honest Pride and Prejudice and Zombies did not disappoint me. I didn’t go in there expecting an Oscar winning film, or even a “great” film. But one thing I require, when seeing a movie, is to have fun, and this film gave that to me. 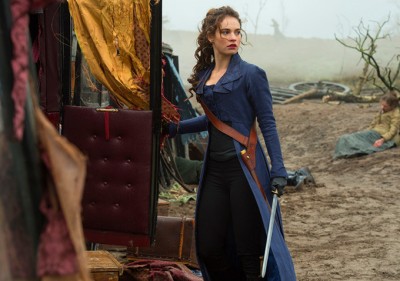 There are many flaws with Pride and Prejudice and Zombies that prohibit it from being a great zombie film. For example, the one thing that really bothered me about this film was Matt Smith as Parson Collins. He practically overacted everyone out of the room. His portrayal as this character was so unnecessary, that I became annoyed whenever I saw him onscreen. But aside from Smith’s performance, I felt that the writing was a bit lackluster. I haven’t read Seth Grahame-Smith’s graphic novel, so my knowledge of Grahame-Smith’s novel is not known to me. Therefore, I don’t really know how the script has reflected that of Grahame-Smith’s original Zombie tale. However, I felt as though the screenwriter, Burr Steers, left some moments, and characters *cough* Lena Headey’s character *cough*, unfinished. We were led up to moments, only to never have it concluded in anyway. But even if the writing was on point, the camera shots, during the action scenes, were sometimes hard to watch. There were constant cuts throughout those scenes, and it left you feeling disoriented.

To be honest, I don’t know if this film would have ever done well. Pride and Prejudice is known for its romance and drama. By adding zombies to the picture, well, you go after a certain group of people: those who can stand blood and gore, but who also love romance and drama. There aren’t that many people who can tolerate both, equally. Even The Walking Dead doesn’t have this much romance.

There really wasn’t any false advertising here. It literally is Pride and Prejudice AND Zombies. I enjoyed this film very much, but I can fall in love both Tarantino movies and Downton Abbey. If you’re a sucker for both romance and action genres, then I recommend this film to you. I think you should give it a shot. You never know, the film you think that is just “tolerable,” may be a film you end up enjoying.

NOTE: STAY AWILE FOR THE CREDITS. THE FILM HAS ONE MORE SCENE TO SHOW YOU.

Pride and Prejudice and Zombies

Written and Directed By: Burr Steers