“Maybe she can tell us about the long-term psychological effects of being strapped to a baby seat… next to a bomb!”

Detective Pikachu, based on the popular Pokémon anime, tells the story of a young man, whose detective father goes missing after investigating a mysterious Pokémon case. Now with the help of his father’s Pikachu, the detective’s son, Tim, must go looking for answers to his father’s disappearance. Now, it’s been awhile since the last Pokémon movie. And as a Pikachu fan, I have seen a bunch of Pokémon movies in my lifetime. Some good and some bad. This newest movie was on my most anticipated list, but like so many video game films that have come before it, Detective Pikachu falls victim to some of the issues that plague those films based on the games we love.

In no way is Detective Pikachu a bad film. Its Ryan Reynolds’ performance of Pikachu that really makes this film good enough to sit through. With this performance, he was able to create such an iconic version of our cute little yellow friend by bringing some sarcasm and dry sense of humor to the character. I can’t say enough good things about this characterization of Pikachu. I love the way the story gives him more of a personality than what has been presented in other theatrical versions. Not to mention Pikachu’s overall design was flawless. Judging by other CGI video game characters as of late, you know who I’m talking about, the people behind Pikachu’s design were able to create a lifelike Pikachu without turning him into something that could haunt your nightmares. 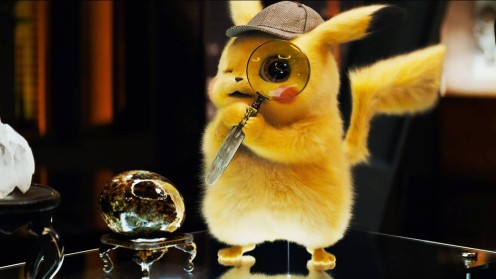 But I must admit, even though I loved Reynolds’ version of Pikachu, and Pikachu’s design, those are the only enjoyable things that Detective Pikachu has to offer.

In every moment, the film hinges itself on the one good performance from Reynolds. Justice Smith, who plays the son Tim, and Kathryn Newton who plays Lucy, give adequate performances. But after a while, their portrayals became boring and repetitive. This could be the performances, but most likely it’s the script. I say this because movies constantly make the terrible mistake of creating a kids film with a significant lack of story. In Detective Pikachu, the adventure, including the mystery that leads to the disappearance of the father, is just bland. There are no real cover-ups or intrigue. And when those twists do occur, they don’t garner any real excitement from the audience. Now some viewers may have wanted more Pokémon storylines, including more Pokémon battles. However, though it may have rubbed people the wrong way, I was never really expecting to dive deep into the world of Pokémon. I couldn’t tell you why, but I think the trailer gives you a clue as to how much of the Pokémon world, or lack thereof, we really see in the film.

I had high hopes for Detective Pikachu. With Reynolds being the voice of the lovable electric rodent, I couldn’t have been more thrilled. I won’t say that the film was a huge disappointment, because I did enjoy it in its entirety. However, Detective Pikachu does have some pitfalls in the acting, and most notably, the story. If you’re in the mood for one of those cute movies, look no further than Detective Pikachu. It’s a harmless film that, even with its mistakes, makes for a rather enjoyable film.