“You really are lucky; you know that? You didn’t have to wait your whole life to do something special.”

El Camino: A Breaking Bad Movie picks up immediately after the events in the Breaking Bad series finale, and tells the story of Jesse Pinkman, who soon after escaping his imprisonment by Jack and his gang, is thrown into the center of a manhunt, and forced to make a getaway from the authorities. With significant moments, from years ago, interwoven throughout the story, Jesse must face his past, while continuing to fight for his future. El Camino takes a more emotional tone after the action and drama of the initial series run, making this a decent conclusion to a thrilling series.

Aaron Paul, who’s most known for playing the Breaking Bad character, Jesse, takes on the role one last time, and does so with perfection. The hurt and anger behind Jesse’s eyes are conveyed effortlessly through his acting. But is it really a surprise, as Paul has always been able to portray his character with such organic emotions? And though he hasn’t really been able to use his acting talents in other films, his performance in El Camino never looks rusty. The film falls completely on Paul’s performance, with other characters coming in sporadically, through the use of flashbacks. Thus, bringing about some creative cameos from various characters. Not to mention, it throws off some eager fans trying to put together who’s alive and who’s dead. 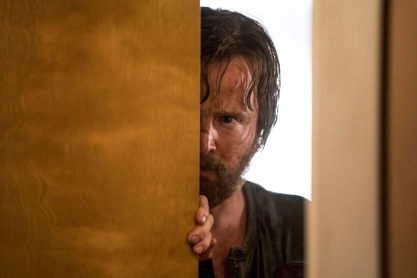 The story of El Camino may leave some viewers with a bit of disappointment. The film is more of an emotional story versus the action-packed, jaw-dropping, series that we saw every single Sunday. The film is like any survivor’s tale, with the main character trying to get to a place of peace and safety. We see Jesse fighting through the elements and the unfortunate situations that have littered his past. Though it was nice to revisit this world once again, was this sequel necessary?

Breaking Bad was unbelievable, and there is no way someone could ever come close to recreating something similar. So when it comes to El Camino, it’s a great story, but one that is a little unnecessary. After Jesse breaks free of his captivity, there are rare moments when Jesse actually asserts himself. He needed to have taken charge more, because not only was his time with Jack and the gang over, but he was also free from the mental torment that Walt caused him. The constant pushover qualities that Jesse had in the television series are still present in El Camino. There needed to be more of that “nothing will get in my way” instinct.  But even when problematic situations would arise, he faltered too much, causing more pain for himself in the process. However, not even this could totally bring down a movie of this caliber.

Even through it has a few faults, El Camino does something that few television shows have been able to do… create a successful sequel. The film’s end can be seen as a little open-ended, thus, leaving the possibility for another chapter. But maybe, just maybe, we can just leave good enough alone. Whether you fall in love with El Camino or not, I think we can all agree in the comradery of excitement that was created in seeing our favorite TV show revisited once again.

Written and Directed by: Vince Gilligan