If you think you have family problems this holiday season, I recommend comparing yourself to Knives Out’s Thrombey family. A family of wealthy and privileged socialites, who upon the “suicide” of Harlan Thrombey, the patriarch of the family, is investigated by a prestigious detective. Enter: Benoit Blanc, a Poirot of sorts, who can read through the family members’ relentless lies in an effort to find the answers to who may have killed the acclaimed novelist. But like Harlan’s mystery novels, his death may see his fair share of twists and turns along the way. Knives Out, full of entertaining material, quick wit, and of course, twists, makes for another brilliant film from director Rian Johnson.

Daniel Craig, who plays the mysterious detective, Benoit Blanc, is on a different level with this character. Craig adheres to the serious demeanor Blanc must have, but also embraces the moments when Craig must dive into comedy, which is so well incorporated by Johnson. Craig is the main course of this movie meal. But next to his delicious performance, is the fresh faced Anna de Armas, who plays Marta Cabrera, Harlan’s caretaker.

While Craig may be the center of the film, Armas’ performance is the one that keeps the plot moving. It goes without saying, however, that I don’t need to stand here and elaborate on how great the supporting characters are. With the family consisting of Michael Shannon, Jamie Lee Curtis, Chris Evans, Toni Collette, and Christopher Plummer, there’s never a dull moment with these fabulous characters. Everything that is said between these family members is sharp-tongued with both wit, and an underlying of political commentary.

Johnson demonstrates his incredible talent for writing with Knives Out. One by one, Johnson is able to illustrate the privileges these family members cling to, and how truly malicious each one is. It’s a typical “whodunit” with layer upon layer slowly revealing itself, only to lead up to the big twist ending. Johnson’s writing, along with his creative directing, manages to tell a great story, while also bringing about moments of sly misdirection. Knives Out is so beautifully done, it’s hard to find much of anything that won’t live up to your expectation. The film takes Clue, along with some Agatha Christie thrown in for good measure, and creates a brilliant and hilariously funny film.

Knives Out is some of the most fun you will have at the movies this year. It would be a disservice to yourself if you didn’t run out and see it immediately. With outstanding performances from the cast, and stunning direction from Johnson, this entertaining film will have you guessing whodunit, until the very end.

Written and Directed by: Rian Johnson 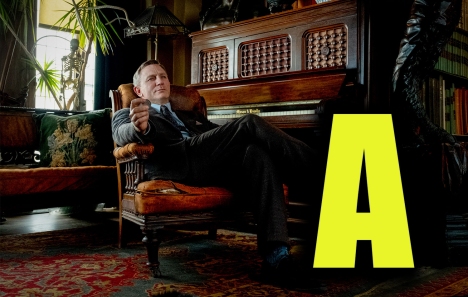