“Fame is a four-letter word. What matters is what we do with it.”

It’s hard to tell a story about someone as endearing as that of Fred Rogers. The creatives behind A Beautiful Day in the Neighborhood, believes they can do just that. Beautiful Day tells the story of Lloyd Vogel, an investigative journalist for Esquire Magazine, who has some rather deep emotional scars when it comes to his father. When the day comes that Lloyd must interview Mr. Rogers for an article about “heroes,” the conversations between the two causes Lloyd to examine the relationship with his father, that has suddenly come back into his life. It seems like an endearing story for those looking for a little bit of that “feel good” drama. However, Beautiful Day doesn’t come anywhere close to communicating the message it so desperately wants to convey.

Sure we’ve seen films like this before. A film that aims to deal with the emotional baggage between a father and son. Hell, we’ve already seen it this year with Ad Astra. To be honest, I think Darjeeling Limited does the best with this storyline, but I digress. A Beautiful Day in the Neighborhood, thinks too much of itself from the very beginning. As though the film had it in the bag, no questions asked. But no, there are just too many places where Beautiful Day fails to excel. Sure, we have Tom Hanks as Mr. Rogers, and director Marielle Heller coming off her success with Can You Ever Forgive Me?. But besides that, what else? Also, Hanks is a contributing factor of the missteps of Beautiful Day. 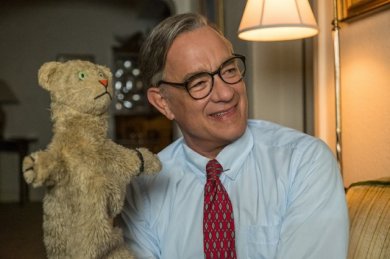 His performance is forced. I’ve heard that Hanks is nothing but a saint in comparison to his colleagues. But what was so enjoyable about watching Mr. Rogers’ Neighborhood on television (yes, I was one of those kids) was how Mr. Rogers felt like a genuinely good person. Hanks takes archive footage, and aims to replicate that organic loving nature that Mr. Rogers fully enveloped. But in the end, Hanks’ performance just doesn’t translate to film. Though I understand why, it’s odd to see how Hanks is the supporting character next to Matthew Rhys’ performance as the journalist, Lloyd. But Rhys makes absolutely no impact whatsoever. Rhys is constantly in and out, as though he just can’t grab a hold of how to portray this character’s emotions. He often goes too far and overacts with the material that is given. However, in Rhys’ defense,  it doesn’t help matters when the script and direction are messy.

I don’t know who to blame here. The script or the direction? I understand the need to take us back to that feeling of the Mr. Rogers television show, but boy did that idea get old fast. It was nice at the beginning when the opening sequence mimics that of the television show with the miniature set, full of little moving vehicles, as we follow the camera all the way to Mr. Rogers’ little home. After that, it’s sequence after sequence where the film tries to tug at our nostalgia bone, but instead completely turns us off. It gets to the point where you’re not wiping a tear from your eye, but instead saying, “I get it,” under your breath.

A Beautiful Day in the Neighborhood tries to be so many things with its heart-warming and nostalgic elements, but loses its way somewhere between the convoluted story and Lloyd’s hallucination. I can see what they wanted to do with the film, but they just couldn’t stick the landing. Watching this movie is like building a tower of blocks. Once one block fell, it wasn’t long until the rest of A Beautiful Day in the Neighborhood came crumbling down.

Beautiful Day in the Neighborhood 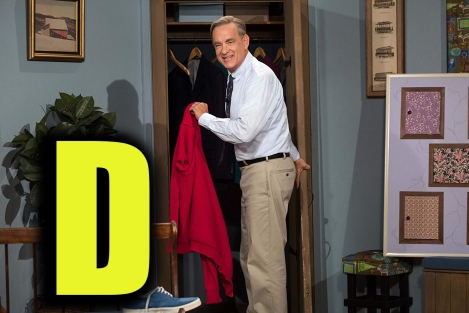 One thought on “REVIEW: A BEAUTIFUL DAY IN THE NEIGHBORHOOD (2019)”