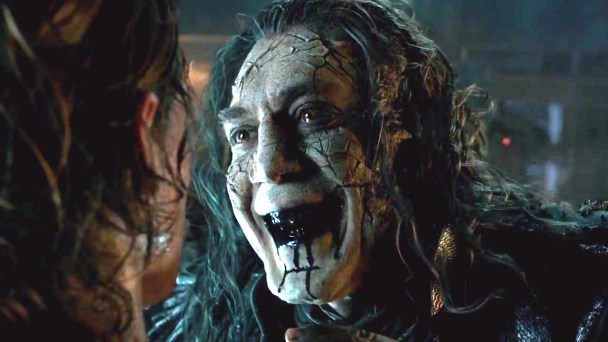 Pirates of the Caribbean: Dead Men Tell No Tales is the fifth installment of the Pirates franchise (God help us) as it tells the story of a new villain, Captain Salazar (Javier Bardem) as he sets his sites on Captain Jack Sparrow (Johnny Depp), in a vendetta that this captain has had since Sparrow turned on him when he was young. Salazar will stop at nothing to get revenge, as Sparrow is busy with his own adventure to find the Trident of Poseidon.

The film’s plot is tedious at best. With a runtime of 2 hours and 33 minutes, there is no reason for this film to be this long. Dead Men Tell No Tales begins as Will Turner’s son Henry (Brenton Thwaites), goes looking for a way to save his father from serving a lifetime as the captain of the Flying Dutchman. It’s a plague which Will inherited back in Pirates of the Caribbean: At World’s End, which is where the Pirates series should have ended. Henry soon stumbles upon the idea of finding and breaking Poseidon’s Trident, thus freeing Will from the retched curse. Fast forward to a bunch of Jack Sparrow nonsense, Henry meets a young girl named Carina Smith (Kaya Scodelario), who is also in search for Poseidon’s Trident, but has a rather mysterious background. As they all set out for this trident, Captain Salazar seeks to find Sparrow and take revenge, as Salazar has lived all these years in The Devil’s Triangle. Nothing is new here with the constant ridiculous quips from Sparrow, and the similar ghostly villain storylines that we’ve gotten since Curse of the Black Pearl came out in 2003.
Depp is same old Sparrow. His character becomes increasingly stale with every performance. He has become too big for his own boots, and it feels like he becoming type cast as Sparrow,

or characters that have that same Sparrow like characteristic. It’s not so much the characters that makes Dead Men Tell No Tales watered down. No, it’s rather the premise and the setting that these actors have a certain limit to their characters. Captain Salazar, who is the main villain, is once again a dead captain that continues to be plagued by a curse put on him years ago. Does that sound familiar? Maybe you saw that in the first one with Captain Barbossa. Or maybe you saw it in the third one with Davy Jones. It doesn’t matter where you saw it, but that fact that the writers can’t come up with any new material, just bores me to death.

As for new comers Thwaites and Scodelario, they simply play the supporting roles to Depp, with the majority of the film being all about Sparrow. The young newcomers were neither good or bad. They really didn’t show me their acting abilities for me to care that much about their characters.

Dead Men Tell No Tales brings on a whole new chapter of the Pirates series. With Orlando Bloom reprising his role as Will Turner, and a few other surprises in store, the film looks to open a possibility for a new storyline, in hopes that they will bring back a few of the old faces of the popular franchise. Nevertheless, whether these films become stale, or possibly get revived, I don’t think we’ll see an end to the Pirates of the Caribbean franchise any time soon.

Pirates of the Caribbean: Dead Men Tell No Tales