I can’t think of a time when a Disney movie didn’t bring us heart-warming cheer. And with the world enveloped in such trying times, it’s no wonder why Disney+ has seen a rise in subscriptions. Now enter: Onward —Disney’s newest animated film released shortly before movie theaters ceased operations. The story tells the tale of two brothers, Ian and Barley Lightfoot, who on Ian’s 16th birthday are given a present from their father who passed away years earlier. Without many memories of their father, Ian and Barley use the magic staff to bring their father back, but not without a few complications.

Onward takes place in a magical world, where not too many years before, the magic within the land was coveted, and one’s love for the fantastical was almost devout. But now the land has a new love: technology, which has made the magic of this fantasy world a bit extinct. So when the boys are given a magical staff that could bring the father back for 24 hours, they are more than thrilled. What father son bonding activities can they do? What talks can they have? But to their dismay, the magic goes haywire, destroying the enchanted stone that powers the staff —producing only the legs of their father. The boys set out on an adventure to find another stone, so they can complete the spell. Tom Holland and Chris Pratt, who play the whimsical brothers, Ian and Barley, have such a great brotherly chemistry with each other. The relationship between these two is probably the best element this movie has to offer. 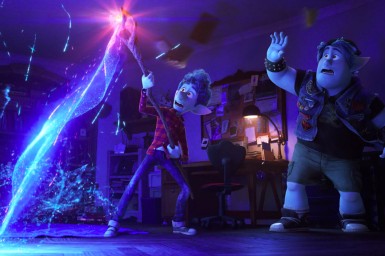 Ian is the younger of the two, and painfully unconfident. He often gets pushed around by others, and can’t exactly stand up for himself. Barley is the complete opposite with domineering confidence, and extensive knowledge on the magical world that proceeded them. Barley’s love for a board game, which I can only compare to Dungeons and Dragons, is what Barley believes is based on the old historical maps of the land, which helps them as they set out for the vast surroundings of this magical world.

An interesting story as a whole, but one that can’t fully execute. When I think of something to compare Onward to, I can’t help but think of The Good Dinosaur. The Good Dinosaur was a decent, beautifully animated film, but in no way did it have the creativity or great storytelling to make it a classic. Onward and The Good Dinosaur are almost exactly the same when it comes to the storylines and character arcs. The Good Dinosaur never illustrates a connection between the characters and the viewer. That almost exactly happens with Onward. While its story is more elaborate, I never developed any connection, or sympathy, for these characters. The story glosses over a needed introduction into the family’s relationship. By the time Ian and Barley’s quest comes to an end, the story feels boring and repetitive, which then causes the ending to be a bit of a disappointment.

I can nit-pick Onward’s narrative, but in times like this, no matter the outcome of the film, you feel the need to watch something like this. Is it worth a watch? Yes. Will you watch it again? Well, that depends. Onward feels like a present you receive with beautiful wrapping paper and a big bow. But once you open it, the present is a bit dull. Onward is entertaining, and brilliantly animated, but I can’t help but feel that the film never quite nails the landing. 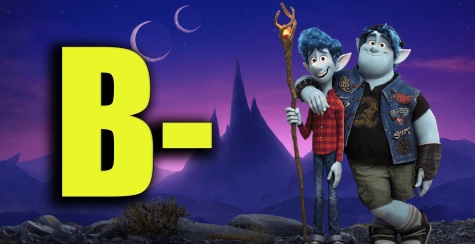